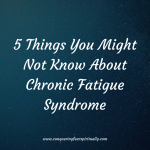 I’ve been there myself and felt that pang of anger in my stomach, that moment when I’m catching up with friends and they complain that they’re having to take on a lot more work because their colleague is suspected of having Chronic Fatigue Syndrome (CFS). I used to react, but I don’t anymore- it’s impossible for others to really understand what it is sufferers go through if they haven’t been there themselves.

Although I was diagnosed with M.E. (Myalgic Encephalomyelitis), this illness seems to have morphed into the more commonly recognised (and slightly easier to pronounce) Chronic Fatigue Syndrome, but this name still really annoys lots of sufferers. Whether you believe that M.E. and CFS are the same illness or slightly different, there are still a few misconceptions about the illness which most people don’t realise.

5 Things You Might Not Know About Chronic Fatigue Syndrome

1) It’s not just about the fatigue

Feeling as though your muscles are going to melt away, not being able to finish a sentence because you’ve forgotten why you started speaking in the first place, living like a nocturnal creature and walking around like a living zombie. Unfortunately, the illness’ name doesn’t really represent the extent of what CFS sufferers have to go through on a daily basis.

‘Systemic Exertion Intolerance Disease’, a new name for the illness created earlier this year by the Institute of Medicine, also has the same complication. I don’t know many people who are tolerant to exertion- we’re only human after all. Muscle pain, brain fog and an intolerance to light and loud noises are only a fraction of the list of symptoms that can be added onto life-altering fatigue.

2) More people have it than you think

According to the Centers for Disease Control and Prevention (source), one million Americans and a quarter of a million people in the U.K. have CFS, M.E. or PVFS (Post-Viral Fatigue Syndrome). However, these figures are from a number of years ago and are increasing worldwide all the time.

The numbers just go to prove that it’s not in our heads- millions of people can’t be wrong. I was ill with CFS/M.E. for 10 years, one of which was spent sleeping in bed for around 21 hours a day and feeling like I had been hit over the head for the majority of the other nine.

There’s a common misconception that if you’re chronically fatigued, you’re not feeling totally wiped-out. It’s nothing a few lie-ins, a Netflix marathon and a takeaway won’t get rid of.

But the truth is that some people have been ill for years with this illness. An added bonus to this condition is chronic insomnia- ironic, I know- so even if people look ok or seem to be functioning reasonably well, their body clocks and general health might take months to normalise.

I’m sure you remember the time when ‘yuppie flu’ was the topic of much heated debate, but the truth is, I’ve never met or heard from a single person with the illness who isn’t desperately trying to get out of their situation. A lot of people who become sick are your typical type-A personality, always striving, and so suddenly going to zero energy has us totally bewildered.

We are not lazy people. We make ourselves relapse in an effort to recover and ignore what our bodies are telling us. We make ourselves even worse when we push ourselves, and then feel terrible when all of our symptoms flare up. It’s the world’s worst vicious cycle.

Even for a diagnosis of the illness, you have to rule out a whole list of other illnesses just to be sure, and even if it is diagnosed, there’s very little that patients can do with this new information. It’s a complete mystery.

So, if you have a friend or family member who is ill with CFS, M.E. or another chronic illness, please send a little love their way. We’re frustrated out of our minds and have no ideas what’s happening to us either.

* Main Photo by Anfal Shamsudeen; second photo by Jimmy Chang; both for Unsplash 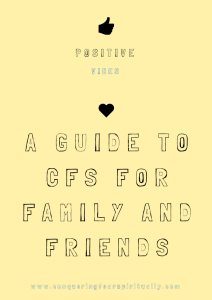