Over the last few weeks and even as I sit here writing this today, change and the realisation that I might  be frightened of change has been staring me right in the face. Even when I’m not looking for it, it keeps on popping up- in blogs posts, in articles on the internet, in my yoga practice, everywhere. Actually, I tell a lie, it hasn’t really been following me around- I’ve been open to accepting it into my life a lot more. This has highlighted where my limitations are- it’s incredibly uncomfortable, but I feel like I’m growing (such a beautiful feeling!) As much as we want to hold onto things around us and certain situations, the world around us and therefore our worlds are in constant, gentle flux.

When you’re ill with something like CFS for so long, there are moments when you’re going to want to play it safe (as in, pretty much most of the time). Who would want to go through relapse and the agony of starting at square one again, right? It’s embarrassing, uncomfortable and it feels like there’s now way out. You’re completely stuck and you’re pushed to the very limits of what you can handle and what you can’t…

…at least that’s what I thought for a while before I hopped on board the change wagon. Once you’re on, it becomes pretty impossible to get off.

This week, I’ve gone gluten-free and ramped up my yoga practice (I seem to have accidentally fallen in love with it, even though I wasn’t particularly mad on it before) Next week, more of the same, more reading, more catching up with friends after being a slight hermit (I blame Australian winters!) and less playing it small.

Would it really be so bad if you bought an audiobook that could change you life and committed to listening to it, instead of just buying it and putting it on the back-burner like you did last time? What’s the worst that could happen? You don’t like what they have to say and switch it off. Nobody got hurt, you saved face and at least you took the first step and tried.

Maybe you want to ditch the coffee and try a green smoothie? Honestly, it’s a completely no-brainer. You don’t have to like it, but you just might. They look disgusting, but they taste pretty flippin’ good, let me tell you.

No marathon running, no switching to a vegan diet overnight- just play it softly. Shift softly. The reality is, you can think about change until you’re blue in the face, but at the end of the day, you’ll still be where you are unless to make the change.

That’s all there is to it. Just try. Be courageous.

(These suggestions probably sound really patronising, but honestly, there was a time in my life when I was so scared of change and of doing something differently, of thinking about things a different way, that I became really, really stuck. Changing my diet or choosing to read different books were terrifying to me at the time. I would hate for the same thing to happen to you.)

I just want to leave you with this picture below, which really got me choked a few days ago.

If you want to change, you have to come unstuck. 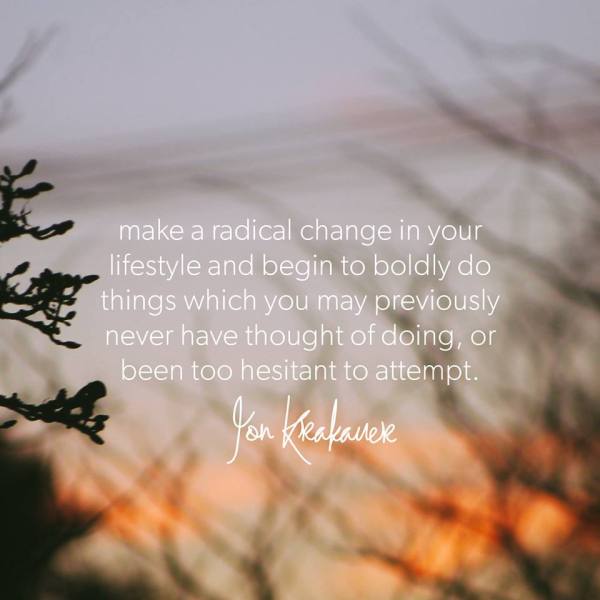 Picture and design by the beautiful freshbysian.com

What change can you make today?

2 Responses to “Are You Frightened of Change?”