I used to be one of those people who would throw a cup of instant coffee down their necks with breakfast, whether I wanted one or not, before heading out the door in the morning. I would barely even have time to taste it, I drank it so quickly and mindlessly. I would then make myself another cup of coffee when I got into work, then another cup of instant at lunch and after work, probably followed by one when I got home. I used to tell myself that drinking this amount of coffee was ok because, to be honest, I very rarely got to finish a cup (teachers out there around the globe will know what I mean on this one!)

Before moving to Australia in 2011, I decided to have a major caffeine cut-out, so I thought it’d be a great idea to go cold turkey. I woke up on day three with possibly the worst headache I’ve ever experienced in my life- the only thing that cured it was, you guessed it, coffee! So I went back to one cup a day, but pretty shortly after that I had no need for it at all. I felt calmer, less jittery and to be honest, saved a hell of a lot of money in take-out coffee (You know those moments when you’re waiting for a train and there’s a kiosk right next to you? 9 times out of 10 I would always grab a coffee, usually just for something to do).

Since then, I’ve become a huge herbal tea addict- I just can’t get enough. I truly belief that they can have amazing benefits on our bodies and I love exploring new tastes and combinations. However, another little gem has recently become a non-negotiable part of my morning routine and it’s the best start to the day you could give yourself. 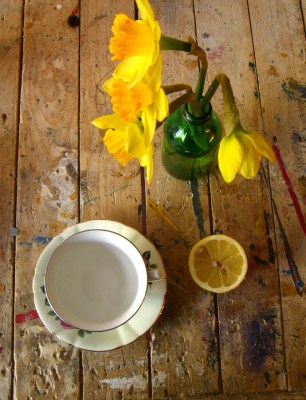 Image taken from Chocolate and Chard

Water with lemon- how I love you!

How To Do It

Simple! In the morning, squeeze about a quarter of a lemon (organic, if possible) into a cup, picking out any pips(!). Then, place one or two slices of lemon into the bottom of the cup, and pour on some filtered cold water (to about the half-way mark). Top the rest up with freshly boiled water, and you’re done!

You can also jazz it up with: 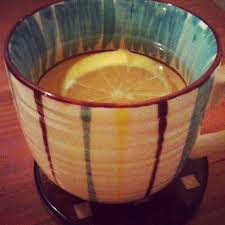 Why It’s So Flippin’ Great

So there we have it! Have you tried lemon in water before? How did you feel after drinking it? I’d love to hear your thoughts below. Give it a go!

4 Responses to “Caffeine, Lemon And Water- A Love Story”