There’s a lot of talk these days about fear and our ‘fight or flight’ mechanism…and so there flippin’ should be. Fight or Flight is a biological impulse that can protect us- it’s an instinct we are born with, an instinct that our body and mind automatically know how to kick into action and put into good use. 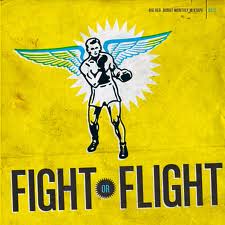 But, is it always to good use? While recovering from CFS, I realised that this fear-based response had been deceiving me and holding me back from a lot of things. What was a biological response turned into part of my everyday life and it was utterly exhausting. Fight or flight is meant to kick in once in a blue moon when faced with a lion roaring in your path, not when deciding what clothes to put on in the morning or deciding whether you can be bothered to go across town to meet a friend for coffee. After the lion incident, the body normalises itself and our hormones return to normal.

But in our society this ancient mechanism kicks in in all corners of our working day and our down-time. Adrenal Fatigue Syndrome (a familiar cousin of CFS) occurs when our body’s fight or flight response is permanently switched on and we see every tiny problem or obstacle as a terrible life-threatening occurrence. This triggers the same biological response as seeing the lion repeatedly throughout the day, and our bodies can’t cope with it. Cue complete burnout, exhaustion, headaches and a lack of interest in things you used to enjoy.

When I started my teaching career, I completely ignored any feeling at all that I was ill. I would fight harder and harder to get into school, prove that I was doing ok and get the job done, however detrimental it was to my health. After months of ignoring this, I woke up one morning and couldn’t move…for 3 months. Maybe I should’ve listened to my body.

On the other side of the coin, once I was better and doing well, I was left with an unnerving feeling that even if I felt slightly unwell, I was going to end up spending 3 months in bed again. So, I hid away, just in case .. Cue my flight response kicking in…and, you guessed it, feeling unwell for a long time.

I’ve realised since then that I didn’t need to run away as much as I did. Illness is usually there to teach us to slow down and listen, even those seemingly insignificant illnesses like sore throats and colds. Fighting didn’t serve me at all and actually made me sicker for longer. When I was perfectly healthy, but my flight response told me otherwise, I’d think about illness, which, again, actually made me sick.

Finding the balance is a difficult one, but you’ll know deep down if you’re fighting too hard or you’re just running away out of fear of facing up to things. Get honest with yourself.

Whatever you discover, love yourself for it and love your fear.

You’ve come a long way- the road ahead is clear if you stop putting up blocks in it yourself.

Love and letting it all flow,

No Responses to “Making Friends with Fight or Flight – Your Fears”