Over the years, I’ve read numerous books and reports on the ‘type’ of people who seems to become ill with CFS/ME and many people who do are of what’s called the Type ‘A’ Personality.

Are You Part Of The Type A Personality CFS Trend?

You are Type ‘A’ Personality if you are/were:

Type ‘B’ Personalities tend to be more relaxed, able to express their feelings easily and are more able to do one thing at a time. Type C personalities are generally ‘nice’ people who work hard, but don’t let stress take over their lives. The diagram below explains the Type A and B differences perfectly. 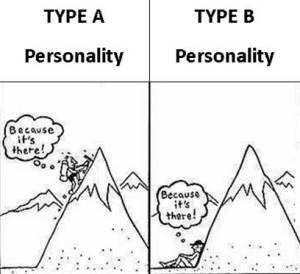 I don’t know about you, but I am definitely a Type ‘A’ Personality. I was a straight ‘A’ student, involved in every single school activity going and never, ever got sick. I put a lot of pressure on myself to be perfect because I knew I could be(!) and because it was expected of me. Although I don’t tend to identify myself as being hostile or aggressive, in a way I believe that some of this anger was directed internally and I buried it for a long time. but I’m definitely prone to stress and used to be massively self-critical, both before and during the early stages of my illness.

At present, there doesn’t seem to be any scientific reason why there is a Type A Personality CFS trend- some people claim it’s due to the fact that Type ‘A’ people might have more of the stress hormone, cortisol, in their body. But, I have another theory as to why I think Type A people are more prone to sickness, therefore opening themselves up to illnesses such as CFS.

Before I became ill, I never, ever took any time out for myself. Even when I had bad flu or a cold, I would plough on and not take being ill into consideration. In some ways, not focusing on your illness can mean that you heal more quickly, but not taking time out to look after yourself when you’re feeling run down can leave your immune system feeling completely depleted. After ignoring ‘minor’ illnesses for so long, your body can just crash, thereby forcing you to look after yourself and take time out. I had a few warning signs before I became really ill, but I ignored all of them. The exact same warning signs popped up just before relapses, and again, instead of listening to my body, I just completely ignored them.

As humans, we need rest. We’re designed for rest, not only when we’re sleeping, but at certain times of the day and at certain times of the year. Unfortunately, because we’re constantly surrounded my technology, computers and smart phones, our bodies ignore the natural light outside and we become completely out-of-sync with the seasons. But rest is designed to restore and repair our bodies, and if we ignore it, our body gives us signals that we’re ignoring it in the form of pain, soreness and illness.

Meditation, yoga and focussing on the present have really helped me to work with my Type A personality, as well as learning to really rest properly (no TV, no jumping off the sofa to do something, no housework- nothing).

How about you? Are you a Type A personality as well?

9 Responses to “Are You Part Of The Type A Personality CFS Trend?”